This year’s iPhone could contain the most important components yet

This year’s iPhone announcements, made just a fortnight ago in Apple’s new World HQ, were certainly not the company’s most jaw-dropping. As usual, the rumors had pegged the likely features early – this time, the 3 ‘big’ improvements in this year’s iPhone were all features Androids have had for some time: A new OLED screen option, bigger screen ‘Max’ option and a Dual SIM tray capability 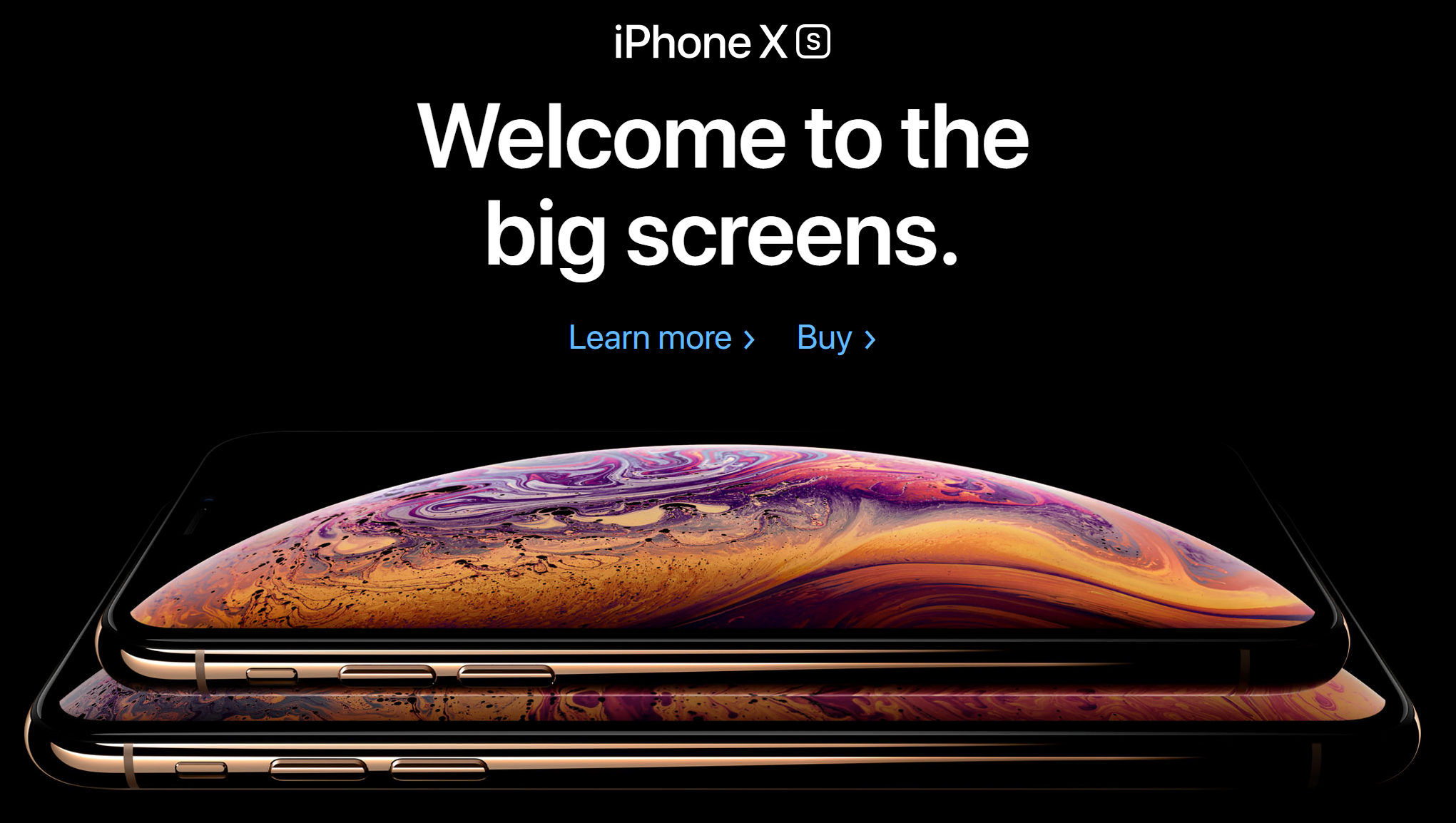 This year’s headline features, OLED screens, larger form factors and Dual SIM trays were all features Android users have had for some time.

However, and viewed from a slightly different perspective, this year’s iPhones contained 2 features which provide Apple a sophisticated strategy in important areas, importantly, addressing both the opportunities and risks they face.

Apple’s iPhone has been incredibly successful for the company and now generates more than 60% of the Trillion dollar company’s value. However, the fact that iPhone users have decided to hold on to their phones longer, potentially as a result of the ever rising price and ever less interesting features to warrant it is just one of the reasons Apple’s device sales by quarter have topped out. (See chart below)

Apple’s device sales have plateaued. One major factor is that people are holding on to their iPhones longer

On the other hand, Apple’s customer base is unusually loyal. Once people enter the Apple ‘ecosystem’ (the collection of complimentary products that exist just to co-exist in the Apple sphere – from iPhone cases to Fortnight apps – more on this below) they find it hard to leave. 92% of people who buy an iPhone upgrade to another iPhone – compared to only 59% of LG customers. (See chart).

Finally, Apple takes a disproportionately high proportion of the revenue in the smartphone industry. See chart below. Apple makes up roughly the same market share globally as Samsung – around 20%. Apple take 51% of market share by revenue – compared to Samsung’s 15%. (All statistics from Strategy Analytics, link below.)

Finally, Apple takes a disproportionately high proportion of the revenue in the smartphone industry. See chart below. Apple makes up roughly the same market share globally as Samsung – around 20%. Apple take 51% of market share by revenue – compared to Samsung’s 15%. (All statistics from Strategy Analytics, link below.)

Samsung and Apple ship around the same number of devices each year. Apple makes three times as much money out of it, however.

The questions Apple has to contend with then are – how do they retain this very loyal, high value customer base, and how can they grow revenue?

Artificial Intelligence (AI) is the science of programming computers to do things that would usually require the sort of thinking that only humans can do.

It is a broad field. there is a great deal of research going on around the subject. What’s clear, however, is that AI is increasingly, the cornerstone of the digital interfaces of the internet companies we interact with including Amazon, Google, Facebook and Apple.

The iPhone XS and iPhone XS Max each came with the new A12 processor – proprietary to Apple. The A12 comes with no less than six CPUs, (Central Processing Unit – the brain of your iPhone) of which 4 are dedicated to efficiency of task, and 2 of which are dedicates to battery efficiency. The board under the A12 has a 7nm architecture, the most efficient chip-making process in the world – as of the time of this writing. From an AI perspective, Apple have fitted the A12 with a new A12’s neural engine can run 5 trillion operations per second as compared to the 600-billion mark for the A11.

Apple announced last year that their A11 chip would be ‘Bionic’ chipset. 2017, then, was the first year in which their processor had a specific component to which Machine Learning tasks were passed. The term ‘Bionic’ alludes to the human / computer capabilities that adding a Neural Processor to a standard set of CPU cores represents.

Neural Networks are computer algorithms designed to simulate digitally the sort of fuzzy pattern matching that we do when we learn a new subject. Apple included one in the iPhone 8/X series of devices it launched last year. The purpose of the chip is specifically to process AI related tasks more quickly.

Apple features which use AI

To give you an idea of how fundamentally AI is woven in to the mesh of Apple’s iPhone analysts say that the iPhone no longer takes pictures. When you take a picture, the phone uses AI to determine the sort of picture you’re taking – close up of your girlfriend or panoramic view? Then the camera stores every piece of information it can get its hands on. As a result, users can now augment the image after it’s been captured – altering important visual aspects of the image such as focus and field of view.

In addition to camera operations, AI services also underpin the recommended apps you will see in the iTunes store, Apple’s facial recognition, Siri voice interface and many other less notable on device services, In the future, Apple hope they will provide Artificial Reality (AR) and Mixed Reality (MR) experiences (the simplest of which is the Animoji facility offered this year, a facility which constitutes their first steps in to MR. )

To make the most of the opportunity AI represents to the user experiences peoples’ phones give them, Apple is allowing their third party developer community access to the neural processor. A large part of Apple’s success has come from their ability to influence stakeholders in their community to produce and provide products which are complimentary.

To give their existing customer base the best possible experience, then, it appears Apple have used their unique ability to integrate software and hardware tasks. By including a Neural Processor, and opening up the development of third party apps which can use it, Apple are aiming to retain their high value customers.

Apple Plan 2 : The eSIMs could give Apple new revenue streams

An eSIM is an embedded SIM

Apple have been a driving force. But why?

Typically, iPhone users have preferred to get their device on contract from carriers. The unusually high concentration of iPhone users under contract is driven in large part by the premium price Apple units carry. (They’re so expensive people find it unaffordable to pay the full $1500-$2000 purchase price outright. Contract plans help the users by easing payments in to a flow over time.) As a result, carriers’ own stores have always been the biggest sale channel for Apple phones.

The eSIM will eventually provide a much better experience than you’re used to, when you’re trying to get your phone to work on a new cellular network. Imagine not needing to keep a physical SIM in the phone all times and still having the chance to move to any other carrier using the eSIM, from settings.

The eSIM has obvious advantages for nomads, travelers and those that would just like to save money on their carrier SIM Only plans. But the new technology also lessen the ‘hold’ that phone companies have over their customers. The eSIM also means that the consumer would have to get their devices directly from the company without having to go through all those retailers.

Apple were a driving force behind the development of the eSIM

Apple were a driving force behind the development of the eSIM, lobbying the GSMA( Groupe Spéciale Mobile Association), the regulatory body responsible for the standards behind the SIM in every GSM (Global System for Mobile Telecommunications) phone in the world. Apple has filed several patents on ideas relating to eSIM technology, including one for their own version of the eSIM, known as the Apple SIM.

The eSIM could be an important component in future iPhones for Apple. eSIMs may offer an opportunity for Apple to start reselling phone plans, on the network of some of the major telcos in the world. It’s not such a crazy notion, industry insiders suggest that Apple is feeling the arrangement out. By offering their customers the option of connecting to an Apple plan from their iPhone’s settings, and offering them an Apple plan, the company could take the 30%-50% of the total cost of owning an iPhone – the plan – away from the phone company.

Apple’s best announcements will be enabled by this year

This year’s iPhone was a slightly boring affair if you read the headlines. On closer inspection, however, this year’s iPhones combines short term wins for Apple: Asian growth through the introduction of a Dual SIM phone, bigger screens, OLED screens and it lays the foundations for it’s future amnitions. It appears they want to use AI to drive improved customer experiences to retain the customers they have. They may also, in the future, be providing an end to end iPhone experience enabled by the eSIM delivering an entirely new revenue streams to the company.