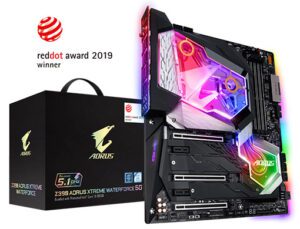 GIGABYTE TECHNOLOGY Co. Ltd, a leading manufacturer of motherboards and graphics cards, announced the launch of the Z390 AORUS XTREME WATERFORCE 5G Premium Edition Bundle which delivers extreme performance with all cores at 5.1GHz and higher on Intel® CoreTM i9-9900K processors pretested and paired with the Z390 AORUS XTREME WATERFORCE Motherboard. The flagship motherboard features top-of-the-line heat dissipation with striking aesthetics, drawing out the best performance from Intel® CoreTM i9-9900K processors which have been handpicked and pretested for their high quality overclocking, … Read more

ASUS earlier this year (2019) announced that its Z390 motherboards will support a maximum DRAM capacity of 128GB via a UEFI BIOS update that’s being rolled out on the ASUS support site. ASUS will bring this increased memory support to all Z390 motherboards via additional BIOS updates that will be available soon. Previously, support for 128GB of DRAM was available only on high-end desktop (HEDT) motherboards with eight DIMM slots, such as the Intel X299 platform. Intel recently updated its … Read more

Newegg and ASUS have teamed up to showcase the new Intel 9th generation CPUs and Z390 motherboards. The spy shots of the ASUS ROG Dominus Extreme motherboard were awesome! There were quite a few ASUS boards shown during the livestream. JJ from ASUS and JC from Newegg team up for a deep dive into Intel’s latest 9th Gen CPUs and supporting Z390 chipset. They’ll also provide a breakdown on the full range of ASUS Z390 motherboards, from PRIME to STRIX … Read more 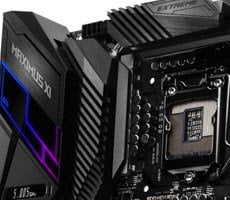 One thing that has become clear in recent weeks that anyone who is planning on building or upgrading a PC around one of Intel’s upcoming 9th generation Core processors will not have a lack of new motherboard options to choose from. We have seen leak after leak of new Z390 motherboards in recent weeks, including a fleshed out lineup from ASUS. …HotHardware.com News Rss Feed

Introduction Courtesy of GIGABYTE The GIGABYTE X470 AORUS Gaming 7 WIFI board features a matte black PCB with with a black armor overlay protecting the rear panel and audio components, as well as an integrated rea…PC Perspective Reviews

GIGABYTE today announced its flagship socket TR4 motherboard for AMD Ryzen Threadripper processors, with out-of-the-box compatibility with 2nd generation 32-core Threadrippers. The new Aorus X399 XTREME board is part of a new breed of X399-TR4 motherboards launched/unveiled in the past few months, with reinforced VRM to cope better with the upcoming 250W TDP 24-core and 32-core processors, such as the MSI MEG X399 Creation. A brochure of this board was leaked to the web last month, and now we se…TechPowerUp